Head to Egypt with Dr. Watson in “The Return of the Pharaoh”

Can you believe how fast summer is flying already? I blinked, and June is just about halfway over, with holidays and Back to School sales just around the corner. It would be lovely to have a month that just crawls by, sort of like it was when we were younger. I just look for the excuses to find a few minutes to relax, and maybe get a little reading in during the day.

As our month progresses, we are reading “The Book of Cold Cases” by Simone St. James. It has been an interesting read so far, and I hope that you are finding it enjoyable. However, before we know it, July is going to roll in. I think that our book for July is going to be one that ya’ll will truly find entertaining. We are going to skip back to Egypt with Sherlock Holmes and Dr. Watson. The Return of the Pharaoh by Nicholas Meyers takes us on a case with the detective duo, as told from the reminisces of Dr. John Watson and the journals he kept on their cases.

Join us for a fun read and a great way to pass the days of summer! If you missed any of our past reads, you can find them here: http://bit.ly/1StF4v2

The Return of the Pharaoh Blurb from Goodreads

In Nicholas Meyer’s The Return of the Pharaoh, Sherlock Holmes returns in an adventure that takes him to Egypt in search of a missing nobleman, a previously undiscovered pharaoh’s tomb, and a conspiracy that threatens his very life.

With his international bestseller, The Seven Per Cent Solution, Nicholas Meyer brought to light a previously unpublished case of Sherlock Holmes that reinvigorated the world’s interest in the first consulting detective. Now, many years later, Meyer is given exclusive access to Dr. Watson’s unpublished journal, wherein he details a previously unknown case.

In 1910, Dr. John Watson travels to Egypt with his wife Juliet. Her tuberculosis has returned and her doctor recommends a stay at a sanitarium in a dry climate. But while his wife undergoes treatment, Dr. Watson bumps into an old friend–Sherlock Holmes, in disguise and on a case. An English Duke with a penchant for Egyptology has disappeared, leading to enquiries from his wife and the Home Office.

Holmes has discovered that the missing duke has indeed vanished from his lavish rooms in Cairo and that he was on the trail of a previous undiscovered and unopened tomb. And that he’s only the latest Egyptologist to die or disappear under odd circumstances. With the help of Howard Carter, Holmes and Watson are on the trail of something much bigger, more important, and more sinister than an errant lord. 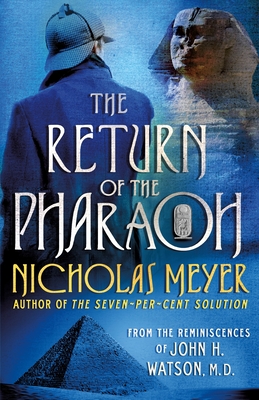 Join the Mystery at “Dread Wood” with the MMS Book Club

Good day, young readers! Summer is finally here, and it is time to read our days away! There are so many fabulous books out there, just waiting to be discovered, and we have found several good ones to dive into over the...

Good day, dear readers! Welcome to May! Summer is quickly approaching, and I love the beautiful weather going on outside. While allergies sometimes drive me inside, I try to spend as much time on my porch as possible...

Jump Into Adventure With “Octavia Bloom and the Missing Key”

Good day, young readers! We are about to embark on some amazing adventures! Summer is just around the corner, and vacation holds so much promise. Everyone is busy making summer plans, and my boys are making their lists...

Dunk into the Oreo Verse!

Purchase Del Monte® products, get a Commissary Gift Card and Del Monte will make a donation*