The Return of the Indian – Week 1

Alright kids, the magic is fixing to start again! We read the first book a few months ago, and everyone loved it! Now we are going to start a new adventure with Omri! This one is just as exciting! Grab your books and lets get started!

Omri’s family has moved to a new home. He misses their old one, as the new one is bigger, but in a more run down part of town. While he enjoys the house and the room that he now has, he still misses his old neighborhood. His friend Patrick moved away, after his parents divorced. So Omri still attends the same school, but he misses his friend. After their last adventure with Little Bear and the Cowboy Boone, they returned the figures back to their plastic state. He then gave the key to his mother, so as to not have the temptation to put them back into the cupboard.

Omri though, used the time that he had with Little Bear for the basis of a story. He wrote the story in secret, typed it up, and then submitted it. When his mother bursts into the room with a letter in her hand, she is giddy with joy. She opened the letter, thinking it was for her, but it was for Omri. The letter informs him that he has won the first prize of THREE HUNDRED pounds! That is a lot of money for a kid! His parents are thrilled, and his brothers are in awe. When he brings the story for his family to read, they are amazed. His story is astounding! His brother questions him on its originality, and Omri confirms that he was the author and made the story on his own. What he has not told his family however, is that the characters are based on his time with Little Bear. How could he tell his family that secret? They would never believe a word of it. He still has the cupboard, hidden away in a chest in his room, and of course, his little figures carefully packed away.

When he sees his friend Patrick again, he is surprised, but happy to see his friend. After talking a while, he broaches the little figures they played with, but Patrick tells him it never happened and that he made it up. When he leaves, Omri is shocked by his friends behavior, but leaves it alone. When he gives into temptation and brings the figures back, he knows that he is going to have to find help for his friend. Little Bear is badly wounded and Bright Star, his wife, is scared. Omri takes her moccasins and heads off to see Patrick. He knows that he cannot do this one his own. Someone must help Little Bear before it is to late….

This week we are reading Chapters 1-5 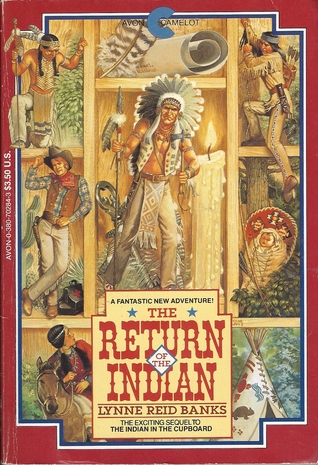