Oh my folks! We are in for one crazy crazy read! Get ready for our horror-ific Octoberfest to begin!! Grab those books and lets dive in shall we, dear readers?

Paul Sheldon is a well known author, a person who has driven fans crazy with his writings. While he is working on his latest novel, he thinks over the last one he wrote, finally ridding himself of a nuisance. He has hated the character Misery for quite some time, but fans seem to eat it up. Having moved on to a new book and a new series, he is feeling on top of the world! But that world is fixing to crash down around him faster than a dismissal from the publishing company.

While working his way across country, he finds himself in Colorado, out in the middle of nowhere when a storm blows in. As he wakes up, he knows that he is in pain, but not quite sure of the rest of his surroundings. As the days come and go, he slowly becomes more and more aware of his accommodations. He is being treated by a Annie Wilkes, the person who found him on the road. She is by far the WORST person who could have come across him, but as he has no choice in the matter, he is forced to accept her ministrations. Annie is not all that she appears though. While she can be somewhat mild at times, her explosive temper leaves Paul fearing for his life. While she uses the pain pills as a way to get what she wants, she informs Paul that SHE is his biggest fan. Annie gushes over the Misery books, and the characters within the bound pages. But when she discovers that her favorite character has been killed off, she flies into a rage. This rage leaves Paul reeling in pain and wondering just how long he is going to last under the care of this misguided nurse.

While she  has laid claim to  his number one fan, he is convinced that she is the type of number one fan that most celebrities shy away from. They latch on and absorb that person into their lives, little by little whittling away at their independence. But Paul cannot just get up and call for help. No one knows that he is missing (as far as he knows, and his car is surely buried under several inches of snow. As he tries to make the best of his situation, he begins to wonder if he will ever see freedom again, and if he will ever be able to regain use of his legs…

As we leave Paul with Annie for now, we are going to be reading Pages 1-89, stopping at the end of section 31. 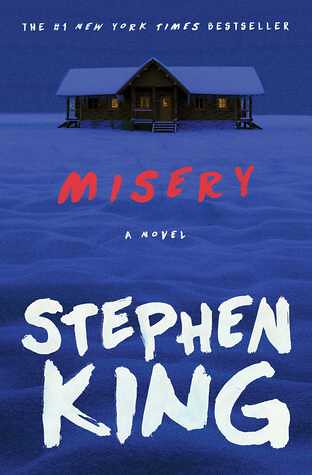